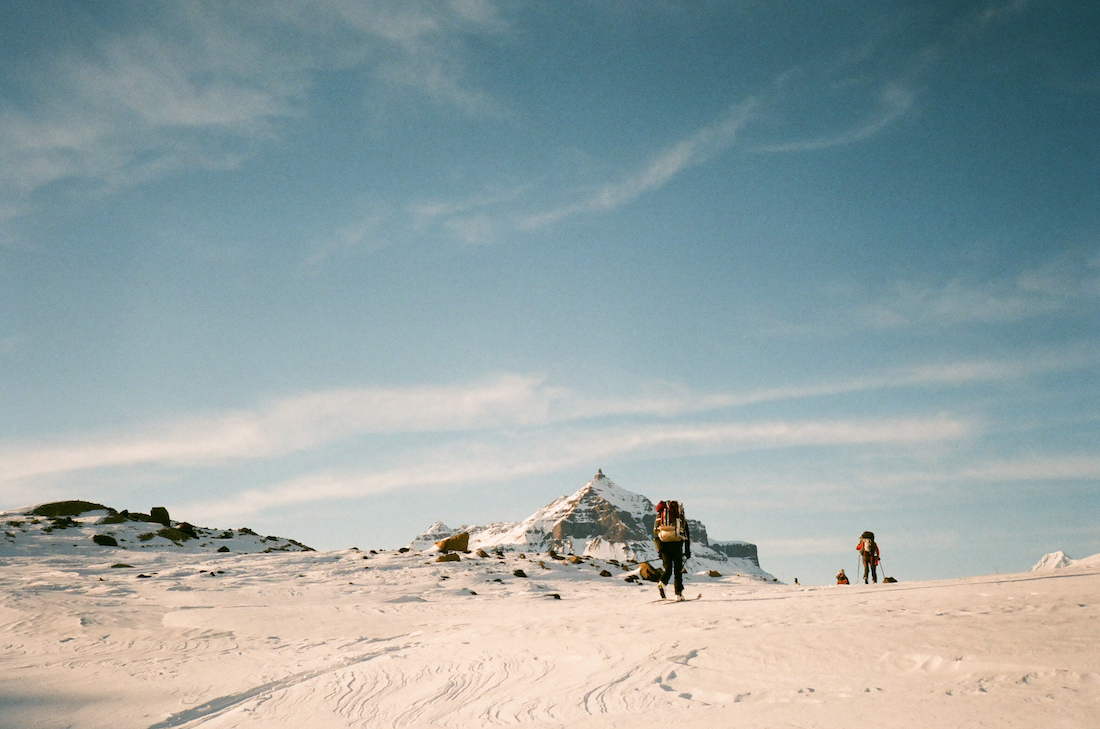 We left Anchorage on March 14 chasing a desire of a lot of many years: location out on skis from McCarthy, Alaska, to traverse hundreds of miles of wilderness in the Wrangell Mountains. We’d used months planning for the trip and several years making the competencies we required to entire it productively. When we remaining, coronavirus had not nonetheless been approved by People as a crisis.

At our send out-off dinner with mates, I declared that Italy was on lockdown, as I’d only just discovered through social media. I joked about how I’d acquired my house two weeks also soon to choose advantage of dropping desire prices. We speculated about investments. I’m ashamed to say that the challenge appeared compact. It seemed international. We were pondering only of ourselves.

The accomplishment has not disappeared, but I’m remaining wondering how much it issues.

In McCarthy, we joined 10 other individuals for the Alaska Mountain Wilderness Ski Vintage, an underground occasion which starts in McCarthy (12 months-round populace 28) and finishes in Tok, Alaska, just about due north. An Alaska custom due to the fact the 1980s, it’s as rugged as wilderness occasions come: contributors vacation unsupported throughout the Wrangell and Mentasta Mountains in winter season with no established system. There is only a begin line and a complete line, and routes range from 130 to 200 miles in duration.

Depending on route, contributors might climb a 70-degree snow slope, pick their way across the longest valley glacier in North The usa, or boot throughout bergschrunds. Or they could possibly go the very long way, steering clear of large elevation but snowboarding much more than 200 miles in the system. Taylor, my backcountry associate of 5 a long time, and I chose a route that was technological but within our abilities. It involved lots of seriously crevassed glaciers, tricky moraine fields, an 8200-foot go, and elaborate wilderness navigation. As the only all-woman staff and the only staff of two embarking on a glacier route, we were mindful of a selected pressure to carry out beyond the clear need to mitigate goal hazards.

The strain we endured about that 7 days in the Wrangells was palpable.

For 6 days, we skied 17 to 30 miles a day. We navigated crevasse fields, designed wind walls for our tent in a blowing storm at 7200 toes, assessed avalanche ailments, and used below-zero evenings on snow in sleeping luggage rated for 15-levels. We crossed glacial rivers barefoot and pantless as the sun sank lower in the sky, collapsing in tears into the snow when our numb and bruised ft experienced at last carried us to the significantly lender. We turned programmed to study hazards, filing each individual threat instantly into a bank of information, our heads on a consistent swivel as we moved as efficiently as possible by way of mountains that command regard.

Concerning the river crossings, bushwhacking, cumbersome path breaking, and cramponing across slender ice ridges, we experienced amazing times of solitude, peace, and serenity. Encouragement arrived in the form of messages in the snow, composed by close friends ahead of us on other routes. The elegance of a sunrise or the broad wildness of the terrain we traveled by means of usually left us speechless.

Right after one particular morning of white-out glacier navigation, the clouds parted and we unroped to ski quickly down a mellow glacier in the sun, by floating, glowing flecks of snow and some of the most hanging mountains we’d ever noticed. We obtained heartening messages to my inReach just about every evening, and reveled in the virtual power despatched by our friends. Some messages produced obscure references to the environment falling aside in our absence. We did not assume way too a great deal about it.

Right after a several times, we uncovered ourselves frequently very easily moved to tears, and turned hyper mindful of our bodies’ reactions to the emotional, psychological, and actual physical roller coaster we ended up driving. On working day 5, I turned on my inReach and read a message from the outdoors:

“Do not go up Noyes. Avalanche hazard super substantial. Whole burial now, everyone all right. Acquire Nabesna highway out. <3”.

It hit like a brick. One of our friends, about a day ahead of us on route, had been fully buried by a remotely triggered avalanche. Three feet below the surface, he spent five minutes frozen in time. He could feel his friends’ footsteps on top of the snow that might suffocate him as they dug madly, implementing his rescue. “Not my legs, my head!” he screamed internally as he felt shovels finally clearing snow from his body. He came out unscathed, and the leaders were able to miraculously finish the route—fighting brush and waist deep snow for days—via a new route to Tok.

It seemed to us at that time that nothing could be heavier than the debris of a hard slab avalanche. If only we’d known what we would come home to find.

When we reached our new end point of Nabesna, news from the outside world began to trickle in slowly. The Denali climbing season was canceled. My friend had to lay off 95 percent of her staff from the restaurant group she manages, as they moved to take-out only.

“What in the world is going on out there?” We still didn’t know the half of it, and we spent one last night on the snow in semi-ignorant bliss, celebrating the completion of our route.

I’m so grateful for that last day. We skied for thirteen hours, mostly in the sun. We cruised at a constant speed, eating miles for lunch. I blasted upbeat tunes in my earbuds as I broke trail for hours straight. Already eight hours into the day, I was hyper-aware that this was the strongest I’d ever felt in my life. My insides did a little dance, and I knew that I’d been seduced by the drug of the Wilderness Classic.

I rode that high nearly all the way to Nabesna, my heart filled with love for Taylor and pride for what we had accomplished together. It was just days later, on my 32nd birthday, that the world crumbled beneath my feet.

“Hope the Classic went well. Dang are you in for a shock when you get back.”

The text came through as soon as I returned to cell service. Similar messages poured in over the days to come, but ‘shock’ hardly qualifies the experience of returning to the new reality of the coronavirus crisis in the US. When we left civilization just seven days prior, elbow-bumps were encouraged instead of hugs, and large conferences were being canceled one by one. Universities had extended spring break, but otherwise, business carried on.

We returned to a world where my younger sister had fled her apartment in New York City because her roommate wasn’t practicing quarantine. When she told me that she hadn’t touched a person in seven days, I finally began to understand the magnitude of the situation. All at once, I learned that I would no longer be able to hug my friends, or even enter their houses.

In a world where I’m told to wash my clothes the moment I step in from the grocery store and to not touch my face after touching my mail, I find myself longing to return to the comparative simplicity of avoiding crevasse falls.

All non-essential businesses were closed, and a “hunker down” order had been issued for Anchorage. My family taught me over FaceTime how to protect myself at the grocery store, on the trails surrounding my house, and even how to receive my mail safely. My sister had written down the number of cases in New York every day, starting on March 16th. In six days, cases had jumped from 850 to 16,900. The crisis was real, and it was here.

So what happens to a dream achieved, but overshadowed by a global crisis?

The accomplishment hasn’t disappeared, but I’m left wondering how much it matters. We embarked on a journey that meant the world to us. We rode the highs and lows and basked in the mountain glow with friends at the finish. And as is the case with most mountain endeavors, the trip was a selfish one.

Our focus was narrow: get across the Wrangells, quickly and safely. In the mountains, things seemed complex–crevasse to the left, avalanche path to the right. Is the weather clear enough to leave camp? Is that blue ice or a rotten snow bridge under that new inch of snow? Taylor’s leg just punched through—where do we go from here?

Now that I’ve been home for four days, navigating complex mountain terrain seems quite simple: survey your surroundings to stay alive. In a world where I’m told to wash my clothes the moment I step in from the grocery store and to not touch my face after touching my mail, I find myself longing to return to the comparative simplicity of avoiding crevasse falls. And that’s probably natural: as mountain people, we’ve learned to focus on ourselves. We excel by prioritizing our hobbies, spending time outside, and honing our skills, speed, and knowledge of the mountains. But the current crisis is a reminder of how little these things matter in the bigger picture.

Outdoors people have many opportunities to step outside of themselves and engage in the global community—take climate advocacy as a prime example. Our actions have ramifications, and our privilege demands a certain level of responsibility. The current crisis is immediate, unavoidable, and scary. Right now millions of lives are at stake around the world. Our goals and objectives have never mattered less. As Taylor put it, “this is not about any one of us, but all of us.”

So, as much as I want to return to the mountains and their simplicity, I’ll instead fill my cup by keeping the mountain memories alive and at the forefront, allowing the dream to live on and feed me hope for the future. Alone in my home in the coming weeks, I’ll remember to be grateful for the intense experiences of the Wilderness Classic, as well as the many privileges and comforts that I’m lucky to have during this uncertain time.

And when I feel lonely, I’ll savor the memory of human touch—especially the prolonged hug I shared with my friend Eric when he crossed the finish line in Tok. He’d been alone for four days and arrived hungry, tired, and beatdown but overjoyed. It was a powerful squeeze that released vulnerability, fear, elation, stress, accomplishment, pain, strength, and love all in one moment. The future is uncertain, but I think a mix of these emotions will be coursing through our collective veins for some time to come.

Photos by the author